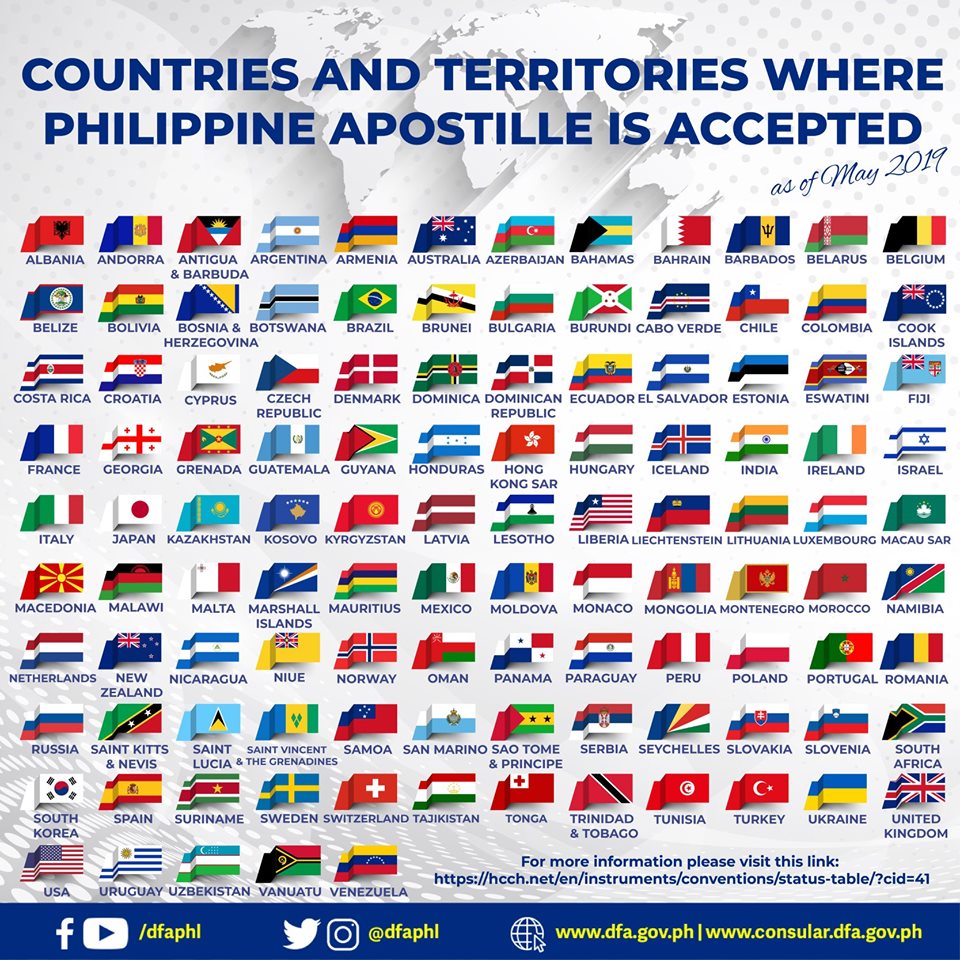 The Philippines became the 117th member of the Apostille Convention and on the 14th of May 2019 saw the full effects of its implementation.

This is an awesome development for Filipinos who live, work or conduct business abroad. This is because you will no longer have to Authenticate your “red ribboned” Philippine-issued government documents at foreign embassies or consulates of countries which are also signatories of the Apostille Convention.

In case you are a bit confused on what is Authentication or Legalization is, this is the process where you have the DFA affix a certificate, red ribbon and gold-colored seal on your Philippine document, such as birth certificate, so it can be used in a foreign country.

The documents which are usually Authenticated or “red ribboned” are PSA (Philippine Statistics Authority, formerly known as the NSO) documents, namely birth certificates and marriage certificates, driver’s licenses, NBI Clearances, academic transcripts of records and diplomas, and other documents used by our Filipinos who have set their sights on lands beyond our shores. For example, when you apply for a work visa abroad, a foreign company or government agency might ask for an authenticated copy of your transcript of records, so they can be sure you really graduated from where you said you did.

So let me pack this news in a nutshell. Authentication is typically a three step process.

Step 1: Bring your Philippine government-issued document to the the agency which issued it have them certify it. (This is not true for all documents, the requirements for authentication will depend on type of document).

Step 2: Bring your document to the DFA will authenticate (also known as the “red ribbon”) this Philippine government-issued document (with may have a certification from step one, if required)

Step 3: Bring your DFA-authenticated foreign embassy or consulate of the country which will use your document. If you are going to use your document in Canada, bring it to the Canadian Embassy.

Why is this possible? This is because all the members of the club have an e-Register where other people can check out all the Authentications a club member issues, and every club member agrees to honor what is written in this registry.

Step 1: Bring your foreign government-issued document to the the agency which issued it have them certify it. (Like in the Philippines, this step may not be necessary depending on type of document and which country you’re in.)

Step 3: Bring authenticated document to a Philippine embassy or consulate, so they can authenticate or “red ribbon” it, so you can use it in the Philippines. This process is also called Legalization.

For non-Apostille Convention member countries? Well, it looks like you have to visit the Philippine Embassy or Consulate. Which one is the closest one to you? Here’s a link to it —-> Official list of Philippine Embassies or Consulates. (They’re also called “foreign service posts” so don’t be confused if you encounter this term.)

Remember step 2 of the process for foreign documents? I said there that “In some countries it’s not the Ministry of Foreign Affairs, so you have check this though.” Well, in this list I just linked to, each county listed is also a link. And if you click on the country, it will lead you to the government organization which does step 2, though typically it is the Ministry of Foreign Affairs.

So now? What will happen to the red ribbon? Alas, this beloved icon of OFW life! The red ribbon will be retired. In its place DFA will issue a pinkish (reddish) certificate without the ribbon and the gold seal.

Update January 2020: The pinkish certificate may be replaced by a blue certificate.

So hope this cleared stuff up. If you have any questions, it would be an awesome idea to check with DFA or your nearest Philippine Embassy or Consulate, especially if you’re abroad. They’ll be able to tell you the nuances that you’ll need to know for the particular country you’re in.