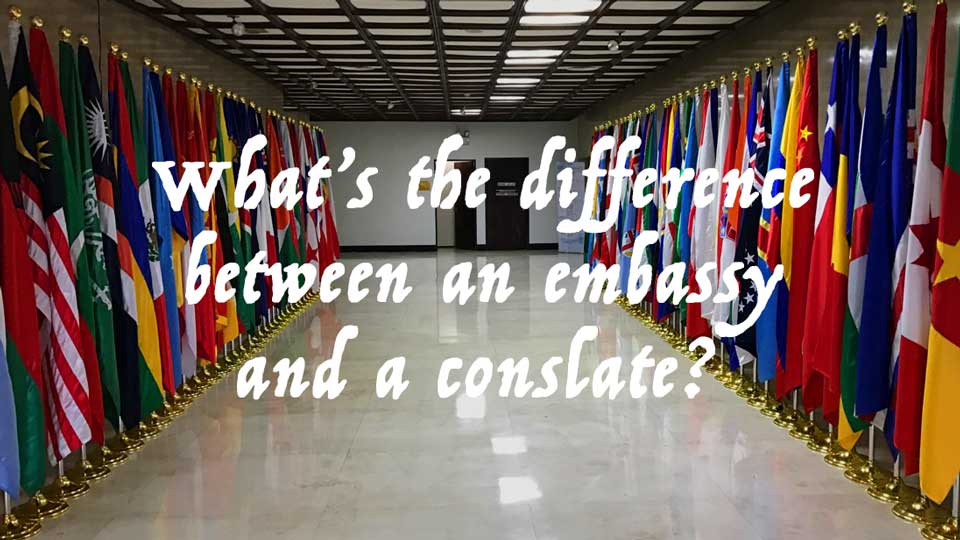 “What the heck is the difference between an embassy and a consulate?” that is probably the question that popped up in your mind that cause you to find this article. So here’s the real deal.

Because of this most people, by that I mean people not involved in foreign affairs or in the foreign service, are not aware of the differences between the two. After all, for most travelers both similar functions. You can apply for a visa either at a consulate or an embassy. If you lose your passport abroad, you’ll probably go to the nearest embassy or consulate. If you are being detained by law enforcement or find yourself in similar really tough situations, you’ll probably want to call your embassy or consulate too,

If you don’t know the difference, don’t beat yourself up about it. Even people in the highest levels of government get confused about the two, as well. Before I joined the foreign service, I had no clue what the difference was between them, either.

Well, lots of people will have an idea that an embassy tends to be larger, and consulates are sub-offices of a sort. That is true to some extent. And, for the purposes of a regular traveller that would be enough to know. But, if you want to get to get a bite of the real meat of the matter, here it is…

An embassy is located in the political capital of a country, a consulate can be located in any city

Virtually all embassies are located in the political capital of the country. By political capital I mean the city where the seat of government is, which is usually determined by where the head of state (such as the president) holds office. This doesn’t necessarily have to be the most economically developed or largest city, just the political capital. Take Australia for example. The prime minister of Australia hold office in Canberra. Thus, all embassies in Australia are in Canberra. Sydney meanwhile is the most economically developed and largest city in Australia. Because of this, many foreign countries, aside from having an embassy in Canberra, will also consulates in Sydney. Even though Sydney has over ten times the population of Canberra, and a lot more economic activity, the embassies are in Canberra and the consulates will be in other cities, like Sydney. That brings me to my next point…

(Note, I said virtually, as I can think of a caveat to this rule, but as I said before, diplomats always write the most boring blogs so I leave it up to you guys to figure out what I mean by that.)

There can only be one embassy, but there can be any number consulates

Each embassy is usually led by an ambassador. Meanwhile, a consulate is led by a consular official. There is a difference between the two. An ambassador, for most cases, refers to the top a diplomatic representative of the country. However, officially, he does not have consular commission, commission, that means of doesn’t.

Notice that in the title of this section I use the word usually twice, referring to both the head. This is because the title of ambassador is a very special and specific designation, that requires the agreement of both the sending state (the country which is has the consulate) and the host state (the country where the embassy is located). Just because one is the top ranking official in an embassy doesn’t make you the ambassador. There are cases where an embassy doesn’t have an ambassador, the one heading the embassy will have another title such as Chargé d’Affaires often abbreviated as CDA (that’s French for “in charge of affairs”).

The term diplomat is generally used to refer anyone that deals with foreign affairs, such as officials that work both in embassies and consulates. But the in the halls of an embassy, you’ll probably encounter diplomats or more properly “diplomatic agents” with titles that some people might not be familiar with. Examples of the ranks of these diplomatic agents are: first secretary, second secretary, third secretary, minister, counsellor. Their main role is promoting relations between the sending state, meaning their home country, and the receiving state, meaning the country where they are assigned.

Meanwhile, consulates normally don’t have any diplomatic agents, but they do have consular officials, such as consuls general, deputy consuls general, consuls, and vice consul. There is normally only only consul general and deputy consul general per consulate, by the way. These officials have what are called “consular commissions”. A consular commission is the assignment or nomination of the sending state (the country the consular official originates from) to person giving him the authority to exercise his or her functions as a consular official. These include issuing visas and passports, acting as a notary publics and civil registrars (registering births, deaths and marriages), assisting the sending state’s citizens in distress, and other functions travellers and expats usually associate with embassies and consulates.

Embassies will typically have consul sections where they also have a consul general and consuls, in addition to their diplomatic agents, giving them all the functions of a consulate.

There are other differences too…

So far, I tackled the main differences between consulates and embassies. For most purposes, the differences discussed here will cover most bases.

There are however lots of other technicalities on the differences between the two. The best way to understand these two is to go to the main source of all these rules that define embassies and consulates and other diplomatic and consular matters in general, the Vienna Convention on Diplomatic Relations (1961) and the Vienna Convention on Consular Relations (1963). These two conventions help regulate and define the way countries should treat each other’s foreign missions, diplomatic agents and consular officials, and an number of other related matters.

You can click them and download copies of  the full text of these conventions on this site as well: Download Vienna Convention on Diplomatic Relations, 1961 (232 downloads)

Congratulations, buddy. So now that you know the basic differences between embassies and consulates. Consider yourself a level up in understanding foreign relations between two countries. Give the person beside you a high five. And, the next time you’re out on holiday in a foreign country and your drinking buddy gives you a quizzical look and asks “What the heck is the difference between an embassy and consulate?” you’ll enough answers to keep the beer tap flowing for a couple more pints.