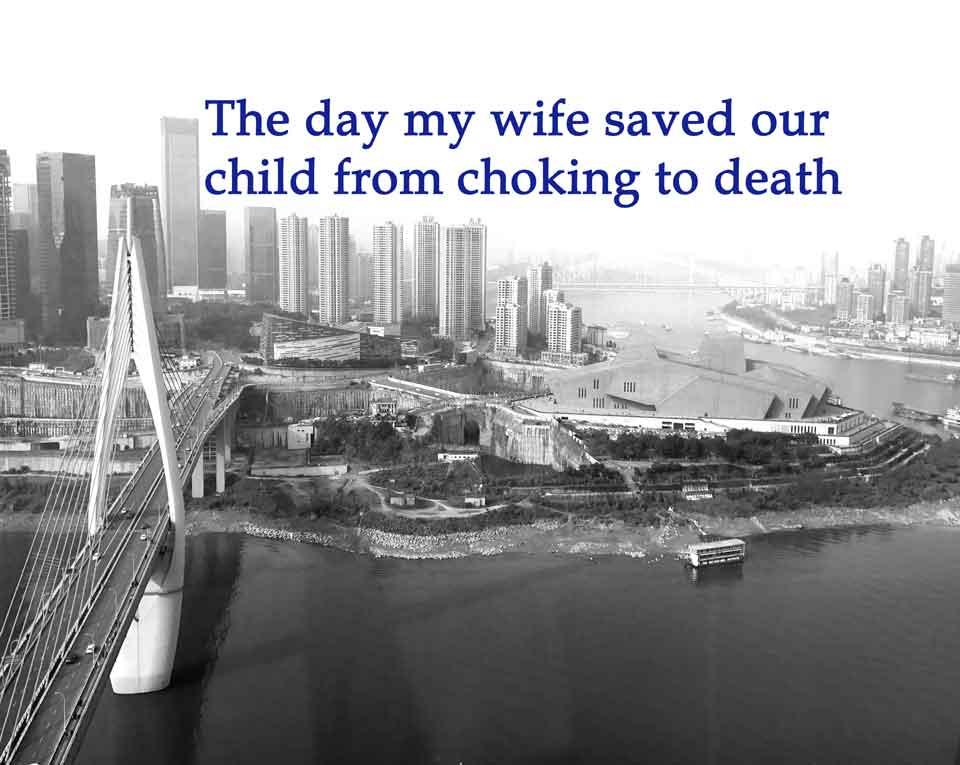 On most afternoons, my wife brings down our kids to play with other kids from the same apartment complex at the common area downstairs. There would usually be couple of other kids at the time with adults watching over them. The kids would range from infants in strollers, to toddlers, to kids six or seven years old. I would usually be at work and I’d get home after all the kids all go back home for dinner (they tend to eat dinner early in China). They would usually be only Chinese-speaking people downstairs, as is usually the case in most neighborhoods in Chongqing, China. It’s a great chance for my daughter to have get some exercise and have genuine interactions with local Chinese kids. Most days pass without incident. But, it is on seemingly ordinary days that a parent’s worst nightmare can happen.

Two weeks ago, my kids and a couple of the neighbours’ kids were having a fun time running around, chasing each other around. As usual, my wife and our kids were the only foreigners there and I was at work. Among the other people in the common area was a friendly grandmother in her early sixties with her grand daughter, my daughter’s playmate around the same age as her. The grandmother had a bag of jelly-like but firm tamarind-flavoured candy. My daughter’s playmate seemed to enjoy the tamarind candies quite a lot and already had a couple of them. She would run up to her grandmother and get a piece before continuing playing chase.

This went on for most of the afternoon without incident.

Without much thought, my daughter popped the candy into her mouth and continued running. After a couple of seconds, my daughter suddenly froze in the middle of the play area. My wife instantaneously knew something was wrong.

My wife called out to our daughter. Our daughter didn’t answer, but only looked back at my wife with round, bulging eyes. She couldn’t speak. Her mouth was agape, as if trying to shout, but no sound came out.

“She’s choking!” my wife thought. She dashed over to our daughter.

Everyone else froze, including all the adults watching over their kids. My wife knew there was no one else who could help her. She knew that the actions she would take in the next few minutes would determine whether our daughter lived or dies. “Don’t panic. Keep calm.” she told herself.

At first she tried back blows, swift and strong between the shoulder blades. They didn’t work.

She tried abdominal thrusts or the Heimlich Maneuver.

She went to back blows and abdominal thrusts. Her mind raced at a million miles a second.

She then remembered in an online lesson she watched to lean our four year old her over her leg, in effect draping or bending her over her thigh, so that my daughter’s air passage would be tilting downward. While our daughter was bent over my wife thigh, she began to do simultaneous abdominal thrusts with back blows, a technique designed for very young children.

With a plop, the tamarind candy came out followed by a spurt of vomit. My daughter was in a daze and vomited a few more times. My wife’s hands were shaking.

Kids will be kids though, and in couple of minutes, my daughter was running around oblivious to how close to death she had just been, if not for the clear thinking and quick action of her mother. My wife even saw my daughter’s playmate ask for another tamarind candy from her grandmother. The grandmother, who witnessed the entire incident, of course refused and kept the candies.

This was quite a wake up call for me. My parents had instilled in me the awareness and caution about the threat of choking. Some month back, I had even bought a newly designed anti-choking device and had it sent from the U.S. to China through a special third party warehouse since the company selling them don’t deliver outside the U.S.. I was so convinced that this device could be used in an emergency that I bought it on the very same day I read about it. But apparent, no matter how high-tech the device, there is no substitute for learning how to do it yourself with no equipment. (This kinds of reminds me of martial arts which teach unarmed combat, despite having lots of options for easily portable weapons.) If my wife had only relied on this anti-choking device and not practiced the techniques for saving children from choking the outcome may have been very different. There definitely was not enough time to run to the elevator and wait till it got to one of the uppermost floors where our apartment was and get my high-tech anti-choking device.

That very night, I also practiced the techniques she used to save our daughter.

Choking is one of the leading causes of accidental death for children under 14 years of age. My wife and I are very careful about keeping our house free from choking hazards. But no matter how careful you are, accidents can happen. Have you seen those plastic Coke bottles with screw on caps? I’ve heard of a child who died choking on one of caps. You can never be too sure.

DON’T DELAY, NOT EVEN FOR A DAY. Go on YouTube and learn from the many highly qualified professionals there showing how to save a child from choking. As a wise person told me: the simplest things can have the greatest consequences.

If through this article I can convince even one person to practice saving a choking child or adult, I would be happy.