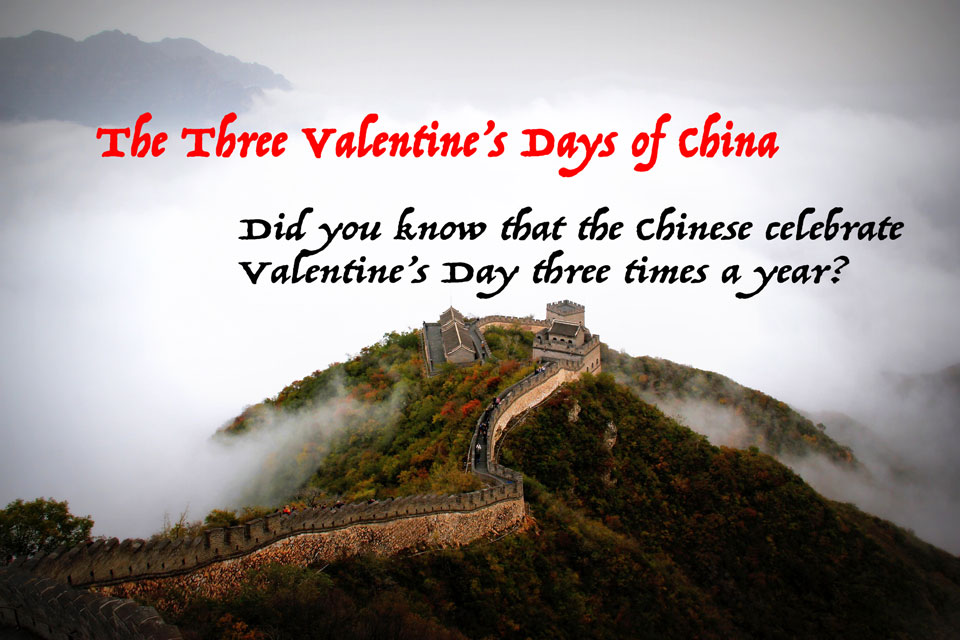 Did you know that the Chinese celebrate Valentine’s Day three times a year?

Ah! Love is the air! Aren’t we all just addicted to that musty, sweaty and sweet smell of love? And love isn’t as heavy in the air on any day of the year than it is on Valentine’s Day. In many countries, Valentine’s Day is that one day in the year pimply teenage boys can scrap together what they put aside from their school allowances for shy, giggly girls. It’s a day of professing undying love, red-faced youngsters with boquets of roses, chocolates and candle-lit dinners.

Let’s check them out one by one.

Just like the most of the world, the “Western” Valentine’s Day (February 14) is also celebrated in the Mainland China. It is however viewed as largely a Western cultural importation. It doesn’t quite get a young Chinese couple’s heart racing as much as Valentine’s Day would in Western Countries though. The older generation of Mainland Chinese tend not to give much though to February 14. But among the younger generation? Boys will be boys and girls will be girls. Any excuse to part with the allowance their parents gave them or perhaps their hard-earned entry-level salaries is the name of love is good enough. Ah, that tickling, warm, fuzzy feeling of being in love.

The Chinese pretty much follow much of the usual activities we tend to associate with Valentine’s Day – flowers, chocolates and fancy dinner dates. However, “Western” Valentine’s Day does tends to celebrated on a much more subdued emotional level. Some more cynical observers my share the sentiment that February 14 is today observed in China merely through the eager efforts of businesses. True enough, bars, malls, online shopping websites and apps will not let you forget the cultural significance of February 14 with all their red heart motifs, special activities and discounts.

It is undeniable though that February 14 has already embedded itself in the cultural consciousness of China. And seeing how things go, it is like that as time goes by, the “Western” Valentine’s Day is bound to get more popular as time goes by.

In the recent years, 520 has been celebrated as a kind of Chinese Valentine’s Day in no small part due to the enthusiastic efforts of online marketers, particularly those on the Taobao shopping platform which dominates the online shopping habits of the Mainland Chinese.

For us to understand 520, we have to talk about Chinese dates. And, I’m not talking about that foxy slanty-eyed beauty sitting across you from the dinner table in a fancy restaurant. I’m talking about the dates on your calendar. You know. Those numbers.

There are a number of way to write dates. It some countries, such as in United States, dates are usually written month-day-year. Let’s say May 20, 2018. In Europe, people might be more familiar with day-month-year, such as 20 May 2018. In China, Japan and Korea, dates are turned on their head (no not the girl “date” on her head, silly! the date “date”). In these Far East Asian countries, dates are written year-month-date. In China, May 20, 2018 would then be written as: 2018年5月20日。

So what does this have to do with May 20 being one of the Chinese Valentine’s Days? This is because date May 20（5月 20日）is associated with the number 5-2-0 which in Mandarin is pronounced “wu er ling”. This sounds similar to “wo ai ni” which means “I love you”. (Take note, all lovers of the world of this most important phrase in Mandarin!) Thus, the numbers 5-2-0 have become a shortcut for saying “I love you” on text messaging and online communications.

Date numerology of this is sort can be quite evident in Chinese culture. For example, they will often refer to important dates by their numbers, such as “5-1” for May 1st Labor Day. Another one is “11-11” or “Singles Day”, another shopping festival recently invented by Chinese online marketers, said to be that world’s largest shopping frenzy.

Anyway, true enough, 520 was virtually unknown in the years gone by, in the era before text messaging when dinosaurs and cavemen roamed the ears. Today, however, it’s a whole different story. With the spread of China’s social media apps (I’m looking at you WeChat), e-Commerce and the more generous spending habits (and abilities!) of the each succeeding generation of Chinese, 520 is gaining popularity with dizzying speed.

While 520 is a modern invention, the Qixi Festival, literally the “7th night”, is one with centuries of tradition, or at least it is recorded to have been observed as far back as the Han Dynasty (206 BC–220 AD). Perhaps of the three days celebrating romantic love in China, it is this festival which deserves the title “Chinese Valentine’s day” the most.

The Qixi Festival is also popularly known as the “Double Seventh Festival” because it happens on the 7th day on the 7th month of the Chinese Lunar calendar. (In 2018, August 17, and usually around this time). The Chinese love their numerology, didn’t I tell you? You might variably hear it called the Qiqiao Festival, the Night of Sevens, or the Magpie Festival.

This festival isn’t just in China. The romantic Qixi Festival has spawned equivalents in other Far Eastern countries. I’m talking about the Tanabata festival in Japan and Chilseok festival in Korea, where the central theme of stars and romantic love is retained.

The Qixi Festival is based on a classic poem on Chinese mythology about the stars written at least as far back as 2,600 years ago. In the poem’s story, a cowherd (who represents the constellation Altair) and weaver girl (representing the constellation Vega) are madly in love. However their love is forbidden. As punishment, an angry god banishes them to the opposite sides of a river (the Milky Way) for eternity to languish in loneliness. However, on the 7th day of the 7th lunar month of every day, all the magpies of world fly to the skies to form a bridge to reunite the lovers for a single night. Talk about star-crossed lovers.

There are some Chinese people who attest that this festival was not as popular as it was before. This seems is reasonable to believe. Romantic love between young people wasn’t widely practiced in China until the recently decades. Arranged marriages were the norm. Romantic love was seen as foolish and a distraction to studies or career. Even until today, it is generally frowned upon for students in universities to enter romantic relationships.

No matter what the older generation people say about the Qixi Festival, it seems that is is here to stay. Qixi Festival is a very prominent in modern culture. Yes, the triumph of love across a galaxy. Love conquers all.