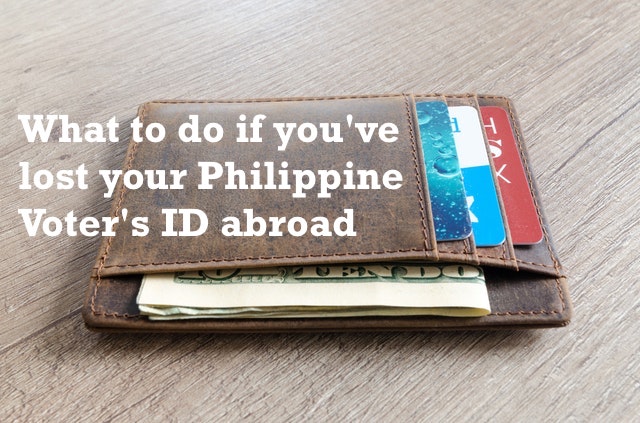 Update (March 2018: All issuances (including replacements) of COMELEC Voter’s IDs are on hold, as discussions on the National ID system are ongoing. Well, that would be a great development.

So you are an OFW or Filipino resident living abroad. Or perhaps you are student studying overseas. Maybe you are on a long work assignment abroad. You may have applied for your COMELEC Voter’s ID at a Philippine embassy or consulate (Read: What’s the difference between an embassy and a consulate?), or on one of their out reach missions. Maybe you applied for your Voter’s ID back home and your brought it over with you.

Let’s say you drop your wallet while on the bus or maybe checking out watermelons in the supermarket, and you lost your Philippine Voter’s ID. Maybe you spilled coffee on it and it’s all yucky and unreadable now. It’s your only Philippine government-issued ID aside from your passport. You wanna cry. What on earth should you do now?

Scroll down all the way to the bottom of this article if you just want to get past all of my jabbering and go straight to the procedures for the replacement of lost or damaged COMELEC Voter’s IDs.

But if you’ve got some time today, like you plan to stare at a blank wall or zone out in front of TV all day, you might as well read on.

I think may be the first place this information will ever thrown out in the world wide web. Why so? I just know. Read on and you’ll find out why.

Let’s start way back. One day, around ten years ago my wife’s (then girlfriend) wallet got stolen. We had just moved into her new apartment in Barangay Holy Spirit, Quezon City. It was our first night there. Earlier that day, she had a mover truck in all her stuff from her old apartment in Manggahan to her newly-rented apartment. She insisted we open and unpack or stow away all the boxes that same day (who does that right? like on the first day of the move?!? haha, but she’s like that and it’s all good). Exhausted from the move, unpacking and stowing, that night we both dropped like rocks on the old mattress we unceremoniously dumped in the middle of the bare living room and fell fast asleep.

In the middle of the night, we were woken by her dog going absolutely ballistic. “Quiet Poochie!” she shouted. After all, we were exhausted. We just wanted to get some well-deserved sleep. And it being the first night in the new apartment, the dog was probably unused to its surroundings.

The dogs kept barking like her life depended on it. My wife yelled at Poochie a few more times to hush the dog, but to no avail.

I however sensed something was not right. “Poochie is trying to tell us something.” I nudged my wife to wake her fully and lifted my head. The dog was barking at the window.

We looked up just in time to see a shadowy figure standing outside pull his hand out from a hole he cut open through the screen of our living room window and dash into away into the darkness. Grabbing a kitchen knife I carefully checked whether the door was still locked and there was no one lurking in the premises. We checked the what was taken. The thief took her wallet and with it all her IDs, pictures, credit cards and mementos collected with it.

It was pretty awful way to spend your first night in a new neighborhood. The stolen wallet was a sore spot. As everyone says, they don’t mind losing all the money when they lose their wallet, but it’s the IDs that are the real loss. Even her BIR ID from her first job was in that wallet. Gone.

We’re married with two kids and three dogs. A while back, my wife lost her Voter’s ID. We think it prolly’ got lost when we sent it to the Philippines to have some papers processed for us. Maybe at the supermarket? Who knows? Well, it kinda was a bummer, but we didn’t think much of it.

Then, a couple of months back reality struck that we would soon be returning to the Philippines. We realized that she does not have any Philippine IDs except for her regular passport (which thankfully she applied for before her wallet was stolen) and diplomatic passport. And of course when we get back to the Philippines, her diplomatic passport will no longer be valid. People in the foreign service or diplomats are after all regular humdrum government workers.

As you know, some government agencies and private entities, like banks, have the penchant for asking for two valid IDs to validate your identity. By the way, why do they have to be valid? I think this valid-thingy is all phooey. It’s as if the ID expiring will invalidate your identity on it. If anything, the older an ID is the stronger it is as a proof of your identity because it shows you’ve had been using your claimed identity longer. I digress. Anyway…

If you’ve lived abroad for years or you work abroad, you know each Philippine government-issued ID is worth at least ten times its weight in gold (or let’s make that twenty times, on the account of IDs being naturally light-weight items). It’s so hard to have them replaced. And time spent on visits back to the Philippines is so precious.

So, when my wife and I found out her only non-passport Philippine ID was missing we knew we had to replace it. After all, I worked at a consulate which is suppose to be the office where you apply for your COMELEC Voter’s ID when based overseas.

I quickly saw that she had an option of renewing it at the Philippines the next we had the opportunity. However, we weren’t planning any trips back until I was reassigned back to Manila. Even if she did go to the local COMELEC office, the issue may be raised by the COMELEC people that she was not actually a resident of where she was applying, and, as you know, government employees tend to be conservative in making decisions.

So, after a bit of of research, like checking COMELEC’s Voter ID FAQs and sending a bunch of Facebook messages to people who work in COMELEC and other fellow foreign service officers, I came upon the conclusion that there was in fact no established process for a Filipino based overseas to replace their COMELEC Voter’s ID overseas.

Even if I had close friends in COMELEC (I don’t) it wasn’t a matter of just calling up COMELEC and asking them to reprint it. In the Philippine government, practically every process needs some kind of legal basis or some written instruction or rule on paper signed by some “competent authority” as it is called. (No, I’m not being sarcastic, they really use the term “competent authority” as it is used in law.) When government employees challenge each other on a procedure, they sometimes ask “So what’s the legal basis?”

I then sent a fax to the Home Office in Manila requesting for the process. (Okay, it’s not really a “fax”, but in the DFA we can still get away with referring to official communications as “faxes” reminiscent of the time they really were faxes, even though now they are usually sent as PDFs.) The Home Office forwarded my request to COMELEC and in some time COMELEC replied with the brand new process.

OK. So all of that fluff for this gold. Here is the process…

The embassy or consulate will then send your Voter’s ID to DFA Manila which will in turn send your ID to COMELEC for replacement.

IMPORTANT, SKIP AT YOUR OWN PERIL: As I was sayin’, this is a new procedure. It was sent out to the Philippine consulates and embassies at the end of January 2018. So, it might not be well-established the minds of some of the personnel that work there. It would really be awesome if you call before you drop by requesting for the replacement of your COMELEC Voter’s ID. Here is a link to the full directory of all our Philippine consulates and embassies so you don’t have to poke around the internet looking for the right numbers to call. No excuses.

So now all you Filipinos who live overseas who damage or lose your COMELEC Voter’s IDs know what to do. Yup, you heard it first from me. Booyah.