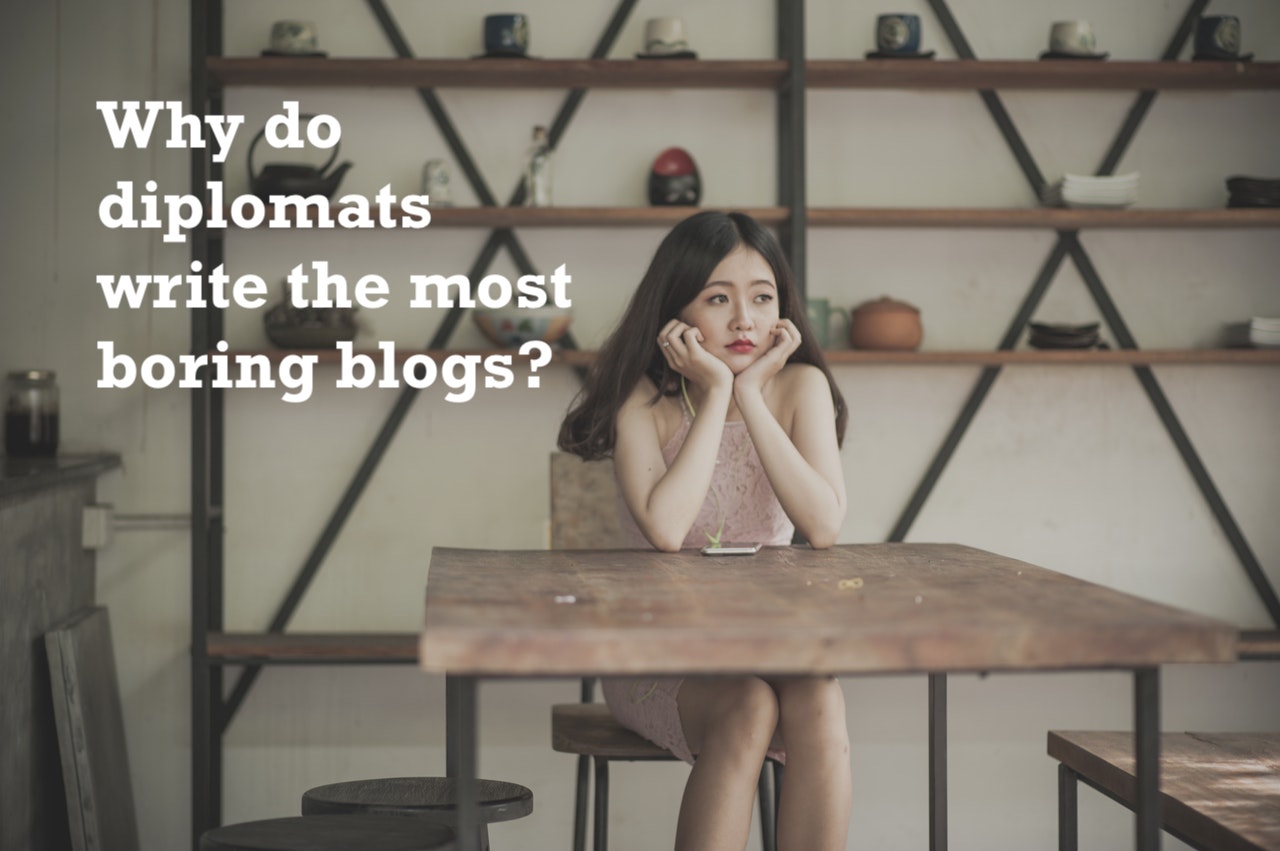 Foreign service officers or diplomats have the most boring blogs ever. There are in fact so few of them that within one week you can probably read all of the blogs ever written by foreign service officers or diplomats on earth since the birth of Jesus. In fact, a blog written by a diplomat is usually such an absurdity, an outlier even, that all other diplomats and people in the foreign service will probably read it at one time or another and go “Tsk, tsk, tsk” in disproval from this departure of diplomaty behavior as they surf through the errant blog’s webpages.

Working as a foreign service officer or diplomat calls for a lot of what my buddies in the foreign service call “circumspection”. That is just a fancy word for having common sense and being careful with what you say and do. And the more circumspect a foreign servicer is, the more he will avoid ever saying anything bad about anyone or anything or anyplace, in public and as much as possible, even in private.

So there it is. Those are the marching orders of a diplomat, a bureaucrat stuck in the cogs of the foreign service. Never say anything disagreeable about the your host government (that’s fancy speak for the country they are assigned to). Never say anything bad about their own country. Never say anything with even one hair of controversy about nationalities, religion, politics, race, sex, cultures, people, governments, lack of government, or anyone… at all.

So, yep you got that right. As a diplomat or foreign service officer, you can’t saying anything bad about their home country. And, you can’t say anything bad about your host country. That is most unfortunate since it often leaves you with little or nothing to say. You see, probably one of the one of reason diplomats became diplomats in the first place is… they like to talk about different countries. So when you take away talking about life in other countries, you’re left with topics as dry as    a plain piece of paper.

C’mon. People love to complain. Blogging was probably invented for all the complainers of the world. Human being love to read nasty complaining stories. Yep, 99.8% of you do. So when you can’t present the negative side of an issue, you end up not writing anything exciting at all.

You might have noticed, I hardly write anything exciting on this private website on mine precisely because of this. I have to think up of all sorts of content that would never offend anyone. Just like that old story of the man and boy and donkey. You can’t please everyone. Obviously, after living in the city of Chongqing in the deep inland of China for six years, described by some of my friends as China’s wild, wild West, I am crazy about China. I got a beer pitcher-full of stories I’d like to spill out online every day. Bad stories and good-but-can-be-mistaken-for-bad-or-ignorant stories. So no go.

Yup. Anything a diplomat writes may have negative implications, whether what he or she actually wrote is something positive or negative. They are all hiding from their HR Departments and superiors in their foreign service. Everything they say can be considered a statement. After all, that’s their job. They’re suppose to represent their countries. And usually this extends beyond their public lives.

I guess this is in the same thread why you never see smoking doctors or purse-snatching lawyers.

So that is why diplomats or foreign service officers simply do not write blogs. Or if they do, they are very boring ones.